Belfield 50 is a celebration for the generations of students and staff who breathed life into the campus over the past five decades. It sets out to tell the story of UCD’s ambitious development of this wonderful campus, from the modest purchase of Belfield House and lands in 1933 to provide sports facilities for the students to the building of the first academic building (Science) in 1964 and the subsequent arrival of all faculties to Belfield, along with student residences that now house 3,000 students. Today, the campus continues to evolve and the future looks bright with plans for the Centre for Future Learning and the Centre for Creativity destined to form a new era of education, research and outreach for the University.

In 2019 Daniel Holfeld was given access to the Tierney Building to photograph a fashion shoot.  Enthralled by a tour of the Andrej Wejchert gem, he focused on the form and space of the 1970 building: from the structural lines of the staircase to the airy proportions of the Registry hall. Upon reflection Holfeld says that: “I still remember the tour of the Tierney Building and even though I’ve photographed fashion in the space I can’t help but feel like the real star of the show is the architecture and that there is more work to be done with it”.

In January Holfeld began to formulate the idea of an artist residency through which he would interpret the UCD campus through his artistic eye and photographic lens. The series of new imagery was completed during the quiet created by COVID-19 between June and July 2020 gifting Holfeld an opportunity, which in his own words he’s “never had the time to work with the buildings in such an intimate way, its producing many more strong images than I can use”.

2020 marks 50 years since the opening of the Wejchert complex for the then faculties of Arts, Commerce and Law (the Newman Building) and for the offices of the University, Registry and Administration (the Tierney Building).

Conveying Space captures the atmospheric qualities of the architecture and emphasises the interaction between structure and natural light. Holfeld’s photographs help us to rediscover fleeting moments of visual access, manifested in tightly cropped details. Through careful positioning and calculated framing, Holfeld illuminates the subtleties and nuances in architecture, while exploring the profession beyond its commercial appeal.

Choosing to work under cloudless skies and high sunsets the intention for Holfeld’s practice while having a transformative effect on the architecture. Deep shadows and powerful illumination reveal clearly defined lines and crisp geometric shapes, which abstract his surroundings into graphical vistas turning the utilitarian into the iconic. To achieve this, he crops building parts out of context, zooms in on architectural detail or isolates certain building features thereby creating, in the process, strong geometrical compositions that have a life of their own. Steps and lampposts, for example, shed their functional role to become two-dimensional flourishes while elsewhere façade segments lose their scale to become graphical abstractions. 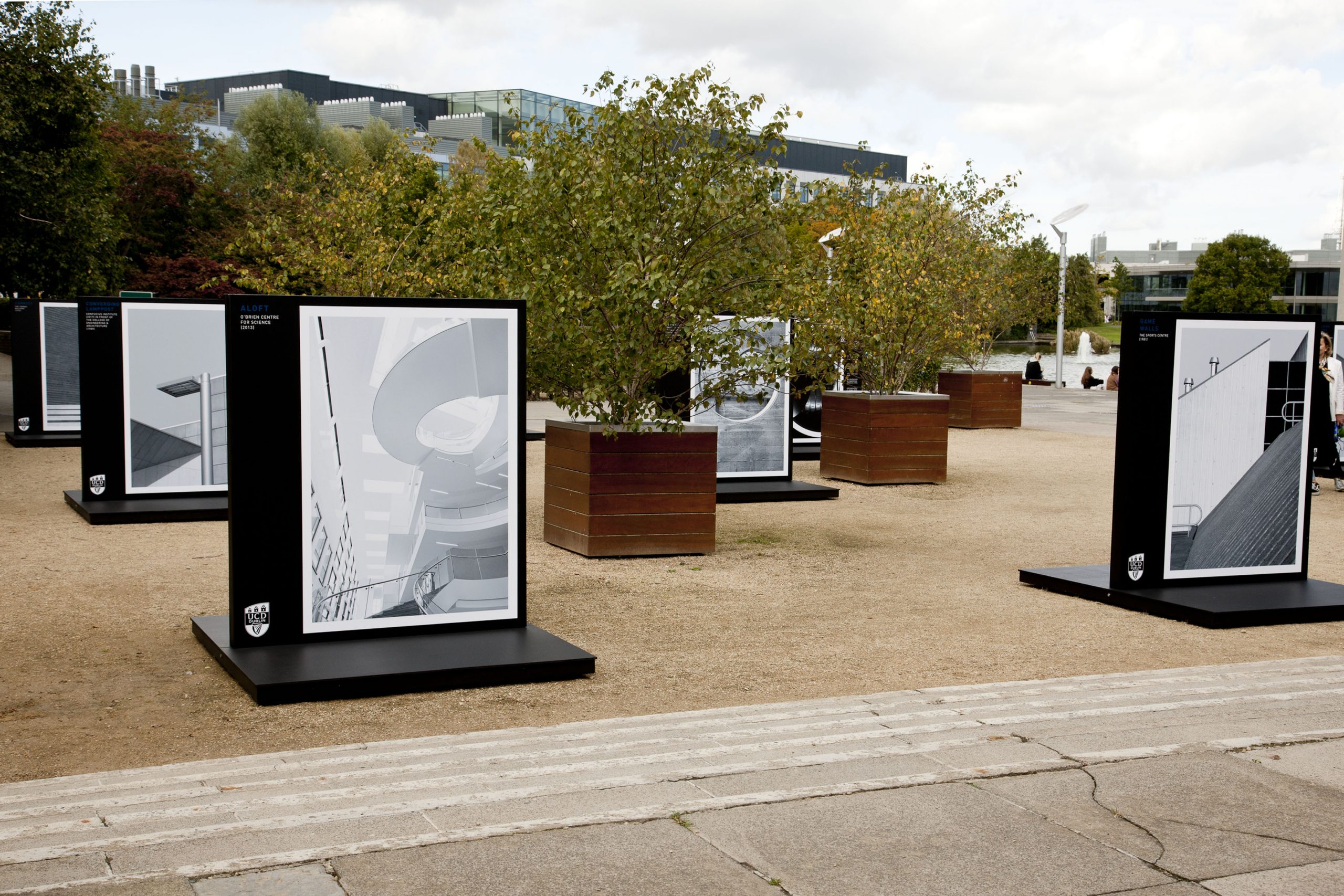 In an intimate and powerful contemplation Holfeld’s images provide access to a new look at the built legacy of UCD; deconstructing the elemental components of architecture, transforming the rebar, concrete and stucco of its buildings to change the way we think about the structures themselves.

Have a look at some of the images here and please visit the installation on the Belfield campus, in the open space between the Newman and Tierney buildings.